This animal is neither really blue nor a cow. But, living in India, the fact that this deer, the only one in its genus Boselaphus is considered half cow is extremely, incredibly, lucky. It’s basically the only thing that has kept it alive up to now, as cows are considered sacred!

A big blue bull by the side of the road

On the etymological aspect of things, the latin name literally means “cow-deer goat-camel”. Or, maybe, “cow-deer like-camel”. In any case, I guess they weren’t quite sure what the animal was, when they first found it. 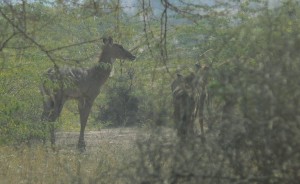 a female, half-hidden by the side of the road

and a female and a juvenile in Ranthambore National Park

It is also called Nilgai (which also means….. blue cow), is present in India, some parts of Nepal and Pakistan. Wild populations occur also in Mexico, Texas and Alabama after escaping from game ranches. Not sure if this is good or bad… 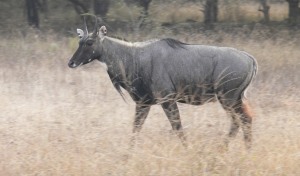 A male, in Ranthambore

A female, again in Ranthambore