A beautiful bird, also called the “Tiger’s toothpick” for it’s unusual (and invented?) habit of cleaning a tiger’s teeth after a kill. Not very probable, if you ask me (and some savvy webbers I found while researching for this post). Our guide in India told us that it’s name probably comes from the fact that the bird has similar colours to a tiger and that it can be found eating lftovers from kills. It’s a very opportunistic bird, eating basically anything. 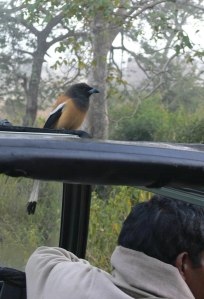 catching a ride on our tour 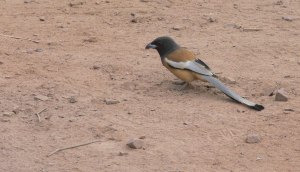 quite pretty, aren’t they?

All these photos were taken by me on our three-day tour of Ranthambore, in India. Before I had my reflex.

It’s calls are nice, too: a fun gurgling sound that isn’t as cacophonous as some parrots I know.