The Kea bird is much, much scarier than I had realised.

You can find the Kea (Nestor notabilis) only in New Zealand. Only in the South Island of New Zealand. And thank goodness for that!

When I went to the Copenhagen Zoo I was walking around and looking at the animals with a few friends, one of which was from NZ. In one of the cages there was a kea: a medium sized green parrot, hopping about on the floor. Looked cute, albeit a bit dull-coloured. “Uhg” she said “I hate those birds”. We were surprised, and asked her why. She answered that they were pests, with the worst qualities an animal could have: curious, intelligent, bold and strong. While she spoke I thought of baboons, and back home researching in the web my similarity was confirmed – they are known to wreck cars, steal property, attack domestic animals. Some people call it “the clown of the mountains” and a group of Kea are called a circus. Yep, the baboons of New Zealand. And that is basically why they have been hunted nearly to extinction. That, and the fact that they eat sheep alive. 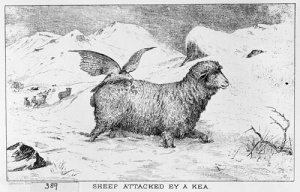 Here you can see one of the only videos in which a Kea was caught chomping on a live sheep. Creepy. Like the fact that they’re a greenish brown colour, until they open their wings, which are bright red on the underside. A bad omen?

The creepy red underwing of a Kea in flight (source: biology101.org)