…that poison and venom are not the same thing?

They’re both toxins with not-so-great effects (depending on the dose, of course), but the difference is in the method in which they are transferred from the organism that synthesises/accumulates them and the organism that “receives” them.

Poison is absorbed or ingested.

So, if you bite it and then die, it was poisonous.

If it bites you and then you die, it was venomous.

The giant centipede (Scolopendra gigantea) uses it’s ginormous fangs to inject toxins. It is creepy and crawly and, most of all, scary.

The male platypus (Ornithorrhynchus anatinus) is one of the very, very, very few mammals that produce a toxin. It has claws under his back legs that inject venom in, among other animals, unsuspecting humans. The photo is of its claws  and the animal is upside down. 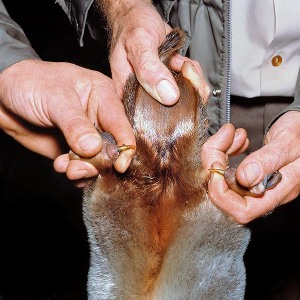 The blue-capped ifrit (Ifrita kowaldi) is one of the few poisonous birds. It excretes a light toxin in its feathers that provokes a tingling sensation and numbness to those that handle it.

Not so scary-looking, right? From http://ntelalides8ou.blogspot.com.es/2012_05_01_archive.html

The red-bellied newt (Taricha rivularis) advertises its toxicity through its red belly. Don’t eat it. Don’t kiss it. Don’t touch it.

The pufferfish (in this photo, Arothron meleagris) is a spiky fish that blows up when it feels it’s in danger. And, if that doesn’t put you off, is highly toxic if ingested. In Japan it is frequently served (for extra-stellar prices) in a russian-roulette-like dinner experience. Would you try your luck to taste one of these deadly fish fingers? 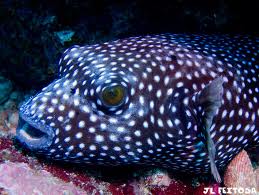 Last but not least, some animals can be both venomous and poisonous. Like the floral snake (Rhabdophis tigrinus), a type of east asian tiger snake. It produces its own venom that it then uses to kill small amphibians, but then interestingly enough it accumulates the amphibians’ poison in glands behind its head and uses this secretion as a deterrent for potential predators. 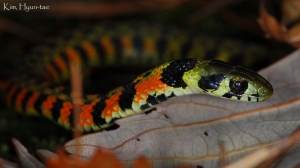 So, did you learn something new?